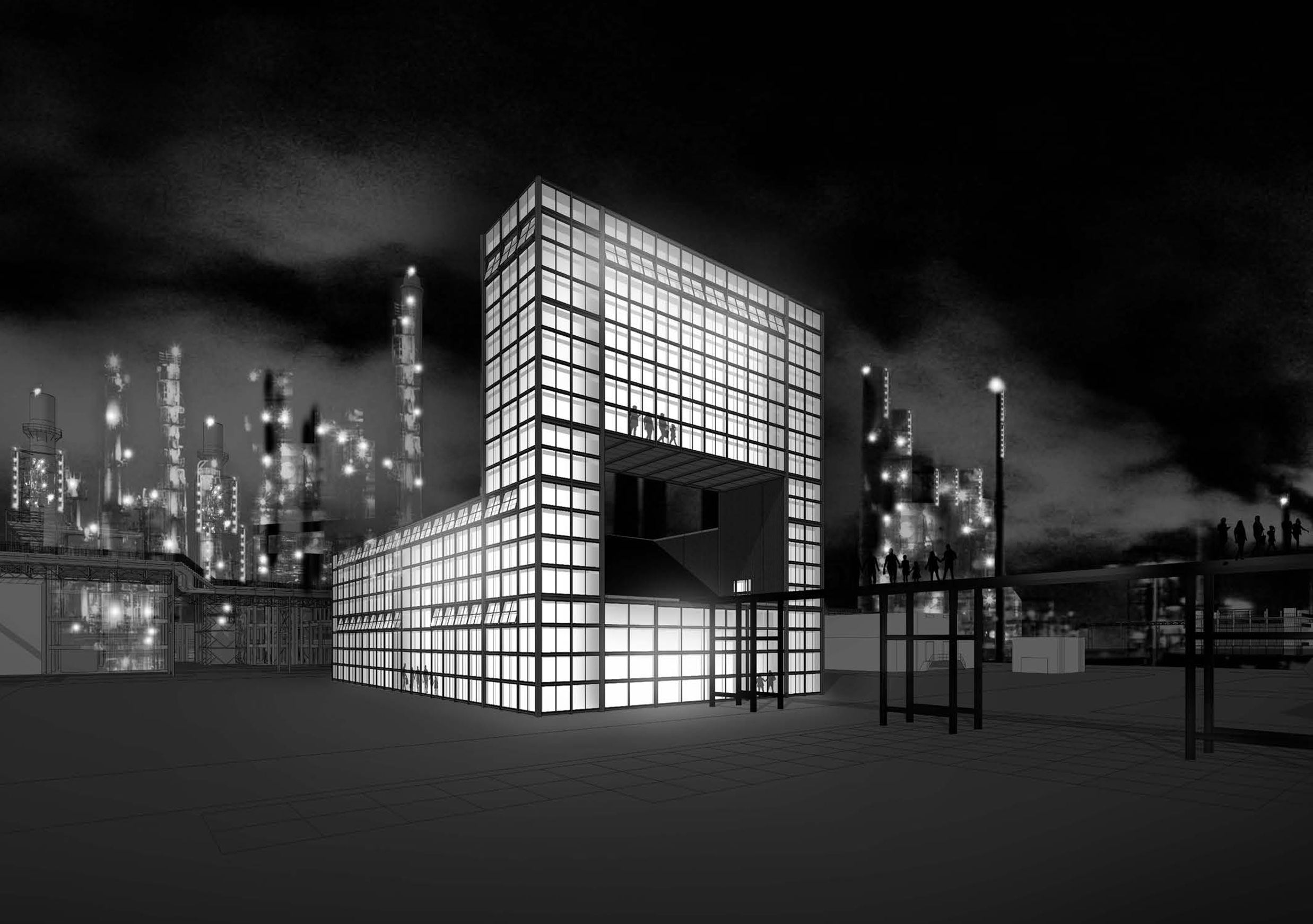 DSM in the south of the Netherlands, the complexes in the ports of Antwerp and Hamburg, and other petrochemical sites bring back memories of sitting in the back of your parents’ car while driving back from a summer holiday, in awe of the magically shimmering lights of seemingly endless industrial sites, like technological cities glowing in the evening sky. Inaccessible, almost alienating environments exist behind their gates, unknown to the public yet incredibly important for our daily lives.

Monday April 15, 1929: the conclusion of Rotterdam’s great oil dilemma. Days before, the provincial government had given the municipality a choice: either fight for the Great Expansion Plan of Witteveen, aiming to provide a framework for the city to grow into a Zuid-Holland metropolis of one million inhabitants, or immediately secure the annexation of Pernis, urgently needed for creating the final industrial destination of oil giant Royal Dutch Shell. On April 15, the municipality accepted the ultimate demise of the Great Expansion Plan in favor of an immediate annexation of Pernis, making its priorities abundantly clear for the first time: long term ideological goals for the city as a metropolitan unity ultimately lost to securing short term financial interests for international oil companies. The decision definitively ruptured the relationship between port and city as it allowed the petroleum companies to embark upon a complete colonization of the Meuse’s left bank spanning almost fifty years, until the first ships moored on the Maasvlakte I in 1973. With it, the industrial expertise of the port of Rotterdam quickly shifted to petroleum, in order to become the most important petrochemical industrial complex of Europe. A new balance was asserted: never again was the growing port considered part of a development of the urban. Rather, the city was subjected to the whims of an ever-demanding and indefinitely growing grand industrial strait, ultimately stretching all the way to the coast and even beyond.

In order to acquaint the city with the fruits of its labor, the project intends to insert a public domain inside currently inaccessible petrochemical zones. Simultaneously it battles the industrial monotony of these sites by using existing networks of distribution and broadening their industrial function with a public one. Elevated pipelines are topped with promenades to create an ever-extendible public network of walkways that conduct interested pedestrians through the industry. This new world is characterized by its ability to create and mark places in the industrial landscape, despite the obvious health risks and issues, to make a place-to-stay out of this place-to-stay-away-from. It can be extended indefinitely, depending on its success, and build up a density of urban functions inside a location that would ordinarily not allow for it.

Finally, the project searches for an immediate and provocative confrontation between petrochemical industry, the public at large, and culture as a critical medium. The tool is a podium. Programmatically, providing a space for all kinds of cultural expressions ranging from exhibitions and markets to performances and meetups. Socially, introducing an element of exhibitionism in an industrial space ordinarily indifferent to esthetics and theatricality. Architecturally, as a raised platform exhibiting and indulging in the sublime esthetic of the petrochemical space. Its location serves as a gateway to New Petrylon, wedged between the basin of the Eerste Petroleumhaven and the historical and industrial epicenter of the Shell refineries at Pernis. Its form developed from three architectural anchor points: 1) the building as an entry, a gate; 2) the building as a vantage point, a raised platform; 3) the building as an escalator, a machine that moves people from one level to another (from the water onto the network). Its clearly demarcated glass and steel volume, glowing in the night sky between the eerie array of lights illuminating the refineries, alternatingly obscures and frames monumental views on the humming industrial complex and the calm water in the basin. A beacon of societal conscience amid the smells and sounds of an uncompromising and persistent technological landscape, the podium is the gateway to a rare experience set in a sublime and otherworldly environment. A reconciliation between the industrial and urban faces of Rotterdam and even our society and culture, right at the doorstep of our country.

The intermediate size of the port : between water and city