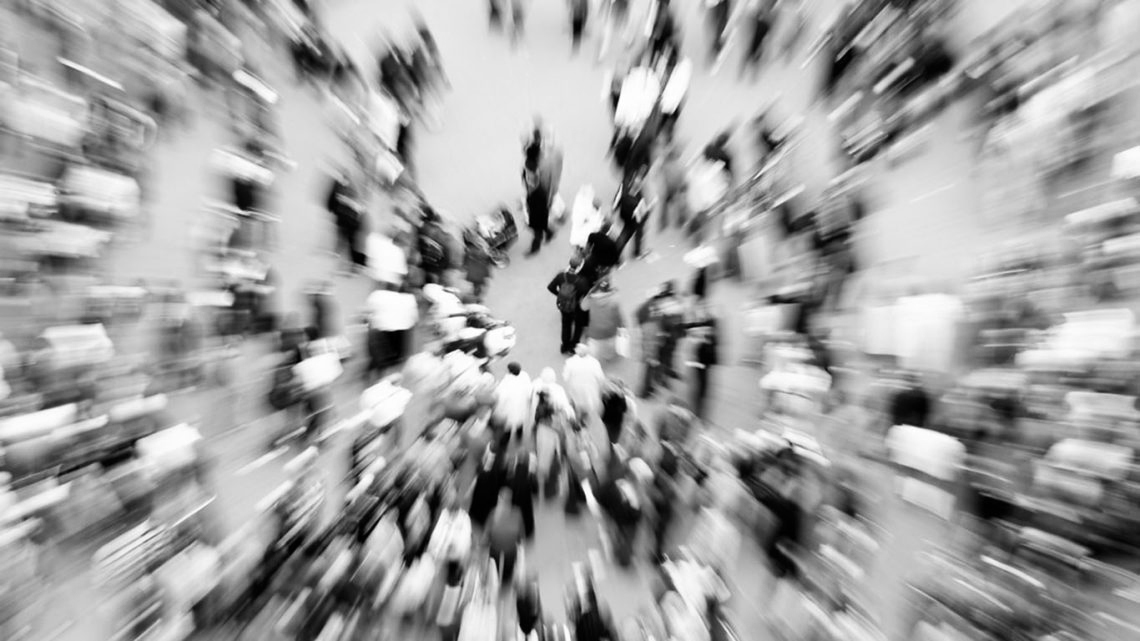 A society formed by the concepts of large-scale urbanization, globalization, high densities, mass production, mass consumption, and high-dynamic processes and connections can be characterized as a society based on acceleration and fastness. This article is part of the introduction to a tripartite research paper on the theme of time in the urban realm, conducted in the graduation studio The Intermediate Size, authored by N.W. Jaspers, J.C.J. Hermans and R.G.H. van Gool.

This described society is, actually, the society in which we live today in the 21st-century. However, living in an accelerated and fast society is not only something of the last era; it is a continuous and increasing urban trend which has already started back in the 18th-century, the era of the Enlightenment, and has continued – and is still continuing – until the modern era in which we live today. Although the fact that acceleration and social pressure were characterized differently in previous centuries – due to different urban conditions, social norms and values, and different lifestyles of people – the problem of acceleration, high dynamics, and fastness as part of the metropolis life have been described and criticized several times over these past centuries.

In the early 20th-century (in 1908), it was Georg Simmel who first wrote about this phenomenon of the experience of acceleration due to overwhelming stimuli related to spatial metropolitan conditions. Related to a non-spatial but social perspective, it is was thinker Franz Kafka who followed Simmel in this same era by writing about the disconnection between society and the individual as a consequence of the accelerated society. Since the late-20th-century (in 1983), novelist Sten Nadolny wrote about the topic of the experience of acceleration from a different perspective; the perspective based on mentality and the individual human mind. Contemporary, in the early 21st-century, it is the German sociologist Hartmut Rosa who critically reflects on the acceleration of modern times from a perspective of individuals living in a society based on fastness and high pressure. Of course there are many more writers and thinkers who wrote about this phenomenon, however, the four persons mentioned above broadly represent the development and way of thinking about acceleration and deceleration in our past and current society.

The text ‘The metropolis and mental life’, written by Georg Simmel (1858) in the early 20th-century (1908), is the first text about problems of acceleration and fastness in the city and their influence on the society’s mental health. In this text, Simmel argued that “the deepest problems of modern life derive from the claim of the individual to preserve the autonomy and individuality of his existence in the face of overwhelming social forces, of historical heritage, or external culture, and of the technique of life”. It is the psychological basis of the metropolitan type of individuality which consists in the intensification of nervous or emotional stimulation which results from the swift and uninterrupted change of outer and inner stimuli. Therefore, the metropolitan man is a creature which existence is dependent on differences. However, as a protection to all these differences which were created by the metropolis itself – for example “interpretations which differ only slightly from one another, impressions which show regular and habitual contrasts, the sharp discontinuity in the grasp of a single glance, and the unexpectedness of onrushing impressions” – the metropolitan type of man has developed an organ – the blasé attitude – to protect him against the overwhelming stimuli of the metropolis. It is this organ “which protects him against the threatening currents and discrepancies of his external environment which would uproot him”. Because of the developed organ, the metropolis man reacts in a rational way (with his head) instead of an emotional way (with his heart).

In other words, the blasé attitude, which can be seen as the most psychic phenomenon which has been so unconditionally reserved to the metropolis, is the result from the rapidly changing and closely compressed contrasting stimulation of the nerves. [1] The blasé attitude can actually be compared with a filter or shield, protecting a person’s mental health from stimuli from outside.

After the text of Simmel, who first introduced the relationship between an accelerated society as a consequence of spatial metropolitan conditions, many others have tried to grasp this “movement” of society, as consciousness reflection to our changing worlds’ mechanics, as well. However, all wrote about the phenomenon from different perspectives. In the 20th-century, it was the German writer Franz Kafka (1883) who wrote about the disconnection between society and the individual to a state where people become more and more dehumanized and disposable. Novelist Sten Nadelyn (1942) followed Kafka in 1983 by publishing his novel “Die Entdeckung der Langsamkeit”. In this novel, the quality that a “slow state of mind” can have, is slowly unraveled, phrase by phrase. The written narrative is taken of traveling through the Arctic seas where – the mental – time would slow down, or almost freeze. In this novel, slowness, as well as, the corresponding need of imagination, become both an unparalleled quality in our spatial and mental environment. Moreover, the narrative is an eye-opener of how society in the mid- and late-20th century already had changed since the past centuries. Besides, the novel also shows how a character driven by slowness would not only be the centerpoint of the narrative, but also the only real character, not by extraordinary deeds, but just by doings things slow in the mass of time-bound hasty persons.

For a contemporary reflection on the accelerated society in which we live nowadays, the German thinker sociologist Hartmut Rosa (1965) is the first who philosophizes, criticizes, and analyzes acceleration, fastness, and the increasing social pressure as part of the society of the 21st-centruy. The spirit of this contemporary society in which we live today is led by the pressure to do something always in a faster, better, or even in a newer way. In his book ‘Beschleunigung. Die Veränderung der Zeitstrukturen in der Moderne’, Rosa grasps this developing faster way of life and the correlative phenomena of everyday social acceleration. According to Rosa, the pressure on our fast and accelerated society is caused by a combination of [1] technological developments including transport, communication, and production opportunities, [2] changing social influences and values, and the increasing degree of the lack of personal relations between people, and [3] the acceleration of the pace of life whereby the number of tasks or actions that need to be done increase. Furthermore, our fastness in life is also influenced by choices that people have to make by themselves; most of these choices are based on putting enormous pressure on ourselves to perform in the best way, leading to competition in life and chasing a career. The fastness of our society is resulting in a kind of social and physical alienation, in which we are getting further and further excluded from ourselves and from which no-one can escape. [2,3] The accelerating cycle that we live in today, is described by Rosa as the “Philosophie der Verlangsamung”. This signifying that we, as individuals, can find meaning by not only seeing ‘literal clock time’ but also ‘figuratively inwardly time’.

The phenomenon of an ever accelerating society raises the pressure to keep up with the increasing pace of the technological, economic and social changes; not merely resulting in social and physical alienation of the individuum. It is also the cause of the increase in the number mental diseases – such as burn-outs, depressions and stress-related diseases – that are decisive for our society. [3,4,5] Alienation can be seen as a situation in which we feel that we do not live the way we want to live, although our life choices are not imposed on us from outside but made by ourselves. The feeling that we are forced to go along with the ‘craziness’ – and also fastness – of contemporary life overrules our feeling of freedom and, moreover, the feeling of being free. Rosa describes this as “the tragedy of the modern man”; because people as individuals believe in the illusion of acceleration as a good thing, as something which will offer more opportunities and developments in life. However, nowadays the acceleration of life goes so fast that individuals can no longer keep up and understand all changes and developments. Unconditionally, this results in social, physical, and mental health issues. [2,3,4,5] Because of the overwhelming stimuli people have to deal with, “we will end up in a ‘merciless treadmill’, in which our life and world hunger is not satisfied, but is increasingly frustrated.” [3] All these stimuli to which people have to deal with, as well as making profit and the urge for competitions, can be seen as the ultimate drivers of the capitalist economy of today. [2,3,4]

It is since the Enlightenment in the 18th-century that acceleration and fastness were considered to be something positive and good. It brought dynamism, opportunities for change and developments, and growth of our economies. The idea was that increasing prosperity would make people autonomous, free, and – perhaps an utopian idea – happy. [3,4] However, the financial crisis of 2008 has proven that a border is crossed. There is hardly any growth in our economy – shrinkage even – but still, people are running faster and faster to maintain the current level of prosperity. [3,4] Everyone wants to keep their job, live in their house, do the best they can, etc. However, in order to maintain this life, one must overwork to keep up, or if not in the position to do so, be satisfied with restrictions on mobility and social freedom. Our pursuit for happiness becomes a trap, or according to Rosa: “We have become the slave of acceleration.” [4] As mentioned above, more and more people are dealing with burn-outs, depressions, or dismissals as consequences of the social pressure nowadays. The acceleration of our society affects everyone; individuals or collectives can do nothing to change this because the system in which we live is actually more powerful than a person himself. The modern time acceleration and experience is thus a totality; permeating our whole life: work, love, friendship, and care. Drifting without becoming crazy – because of all overwhelming stimuli – is thus the only thing individuals can do; this in order to deal with the increasing time and social pressure of contemporary society. [2,3,4,5]

In Rosa’s books, the topic of ‘resonance’ is a frequent returning term. This is because, according to Rosa, resonance can be seen as an answer to the question of how you want to live in an accelerated society. Resonance is described as the opposite of alienation, and is related to the intention and intensity of relationships that really matter and that are important. In other words, it is about the relationships that individuals form – conscious or unconscious – with the world (including other persons and things). Ultimately, it is also about the relationships which we form with ourselves. Persons must be surprised and stimulated within the resonances; they should be open to the strange and unexpected that happens to them, in order to escape the grip of the “accelerator machine” of contemporary society. In Rosa’s book it is claimed that there are three sources in which relationships of resonance can be found: [a] religion, [b] art, and [c] nature. [2,3,4,5]

Port of Rotterdam : into the future

Exhibition: The Aesthetics of Deceleration